Numenera, or: How I Learned to love Antimatter Grenades in my Fantasy RPGs

Last night I tried out a one-shot session of that RPG I've been keeping my eye on ever since the Kickstarter came out back in 2012: Numenera. 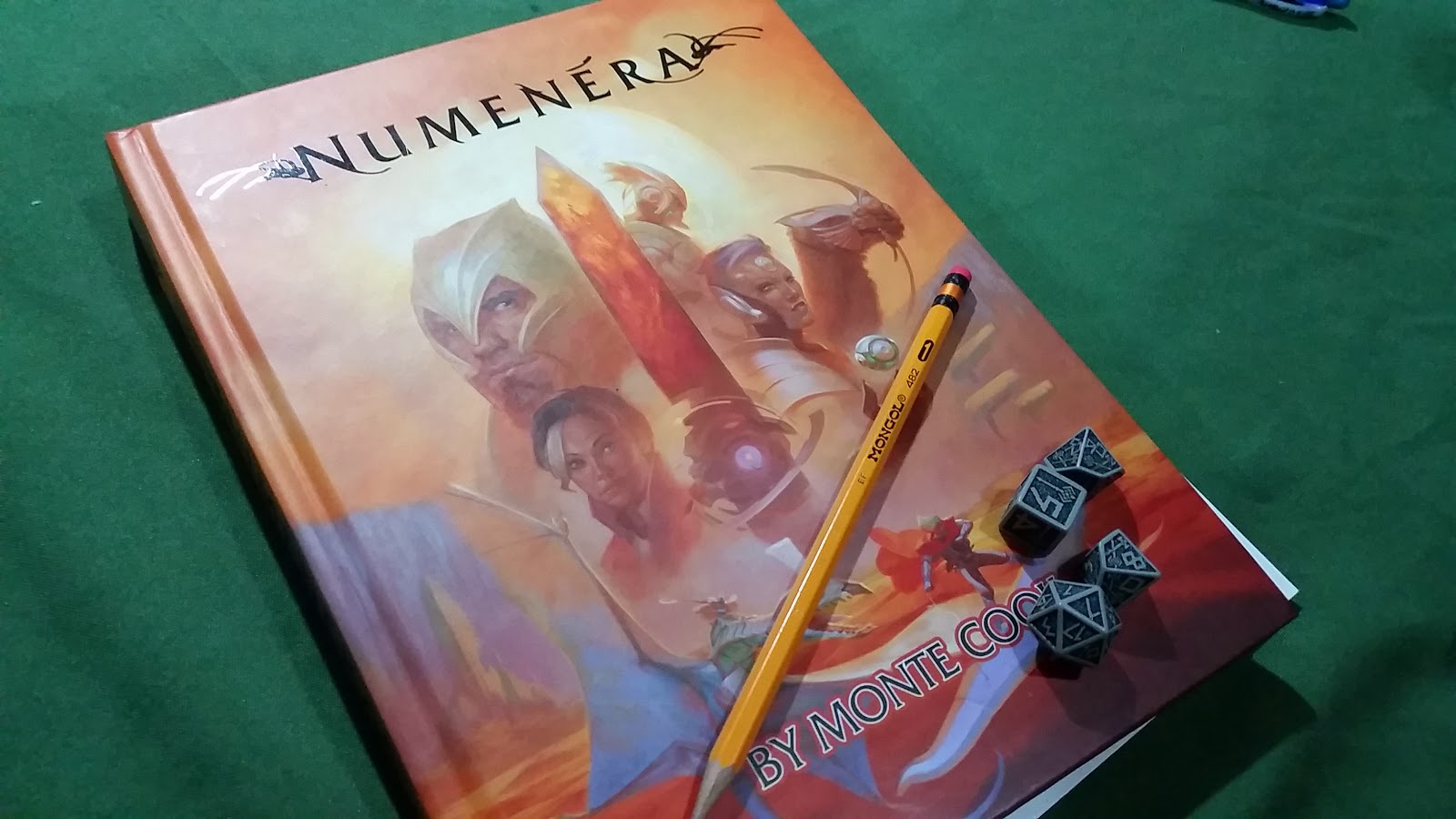 On paper, it's a little bit iffy for my tastes, which is why I didn't end up supporting the Kickstarter. It's ostensibly a fantasy RPG with very heavy science fiction elements, based on one of Arthur C. Clarke's laws of prediction, where he states that any sufficiently advanced technology becomes indistinguishable from magic.

The Setting
So we have the Ninth World, where the previous eight iterations of mankind died out, but not before leaving behind powerful, at times godlike technological artifacts, known as numenera. So mixed with our fantasy we have robots, extradimensional beings, mutants, antimatter rifles, nanoswarms, cyborgs and space flight, but the poor ignorant savages of the Ninth world are, to continue with the Clarke references, a bunch of (relative) monkeys screaming at mysterious monoliths and treating everything like it was magic.

Which is cool and all, don't get me wrong, but in practice, when you're playing the game, it's hard to really get into because the numenera have become such a part of life in the Ninth World, which makes the setting, well, so alien. If your GM, for example, tells you a half-metallic man flourishing a halberd festooned with shimmering cables and protruding circuitry, and riding on the back of a huge two-legged beast that has tiny arms protruding from its lower jaw comes toward you, it's hard to tell if this is a city guard greeting newcomers, or powerful cyber-marauder looking for trouble. When everything is just so unfamiliar, and the world chock-full of the mind-bogglingly different, what is our baseline for "normal?"

On the other hand though, that's also the appeal of the setting. The Ninth World and its tiny oases of known civilization, the kingdoms of The Steadfast, just has so much weirdness to explore that it's as much a fun adventure for the GM as it is for the players who go on the actual adventure. And speaking of how fun it is for the GM, I am absolutely in love with the powerful simplicity of the game system.

Character creation
It takes about ten minutes to make a character, five if you know what you're doing. You complete the sentence "(character name) is a (descriptor adjective) (character type) who (focus verbs)." Mine was "Whyttman is a Swift Jack who Rides the Lightning."

Your descriptor is an adjective that gives you bonuses and penalties. "Swift" gives my character a bonus to the speed stat, a penalty to balance-related actions, and trained skills in running and initiative. "Tough" gives bonus healing, and damage reduction, "Mechanical" gives you a unique understanding and the ability to identify unknown numenera at the cost of giving you a not-quite-human air that spooks NPCs in social encounters, etc.

The three character types are common RPG archtypes that also give you your base stats and skills. There's Glaives (fighters), and Nanos (tech-users who can harness the power of numenera, who the local populations look at as priests and wizards), and the types unlock more powerful abilities and features as they level up. The third class, Jacks, are generalists that have access to both sets of abilities, and can cherry-pick the most useful features from both types, but they unlock the more powerful abilities later than the specialists.

The third part of your character, the focus, is what makes your character unique in the Ninth World. "Rides the Lightning" gives me lightning powers so I can cast lightning bolts from my hands, or infuse my arrows with electricity. When I level up, I gain the ability to travel instantaneously via lightning bolt. Other foci include "Meshes Steel and Flesh," so that the character over time gains mastery over mysterious cybernetic implants all over her body. "Howls at the the Moon" is (the curse of? Gift of?) lycanthropy, which at higher levels becomes stronger evem as the characters control over the transformation becomes more precise.

It's a great system, and, coming from something as clunky-simulationistic as Shadowrun, it's refreshing to be able to come up with a character without spending two or three hours poring over tables and charts. I would've wanted a bit more flexibility with the abilities vs. penalties (a fast guy automatically has bad balance? A stealthy character always moves more slowly than the average person?), but it's something I can easily forgive with such a simple but surprisingly robust creation system.

Gameplay
Basically, the players do ALL the rolling. Any encounter, whether it's a rampaging blood turkey (yes, they're in the game), or a control panel for an automated door, or haggling with a merchant for the price of a wagon, is given a difficulty level by the GM. Players then have a target number to reach-- in combat, it's the same number needed to hit the monster, and to avoid its attacks.


If the number is too high to normally roll naturally on a d20, players can expend Effort, lowering their stats to show how much effort it costs them, for a bonus. But these same stats are also your hit points, so then it becomes an exercise of resource- and risk-management. The GM can also intrude on the combat-- the monster may suddenly behave in a different manner (you mean different from normal blood turkeys? How can the words normal and blood turkeys exist in the same sentence?), or your cyberclaw malfunctions and retracts back into your arm, etc. This intrusion is worth XP, not the encounter itself. And rolling a 1 (there were several rolled last night), means the GM gets to complicate the players' lives without awarding XP. And players can always counteract these intrusions by paying XP, but this is the same XP that you later on use to advance your character. It's also interesting to note that XP is awarded from intrusions and the discovery of new numenera, not from killing things. It's a refreshing take, making exploration and discovery a higher priority than combat.

This simple, powerfully flexible, highly-interactive system leaves the GM a lot of elbow room to tell a story without having to worry about rules to back up something that would be otherwise totally awesome, and cinematic. Of course, this also means the players lean more heavily on the GM for telling a good (balanced) story, and trust him to make intrusions that will tell a better story, not just kill them. But any RPG is a social contract between player and GM anyway-- it's just that the contract you write up in Numenera seems more like a friendly handshake, instead of pages and pages of clauses to slavishly follow.

Overall, Numenera was, is, a blast. It has a few wonky things going on, like how the science fiction doesn't follow any rules and structures (last night a player threw a grenade that "temporarily inverts the ethics of the targets" at a bunch of guards, and hilarity ensued.) But the far-out weirdness of the world carries its own charm, and paired with a simple but very capable ruleset, promises easy GMing that can focus more on story-telling than rules, and really, the stories are what make RPGs fun for me.

So yeah, two conclusions from all this: now I definitely regret not backing the Kickstarter, and Whytmann will definitely be back.

Raymz
Raymz teaches English, writes articles, and chases three cats around an apartment that he shares with them and his wife. Most of his lucid moments are spent playing one game or another, and agonizing over syntax.